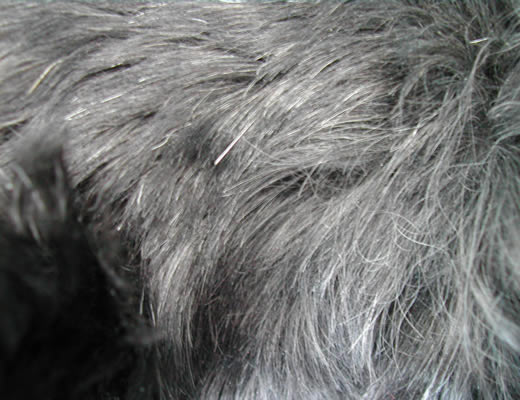 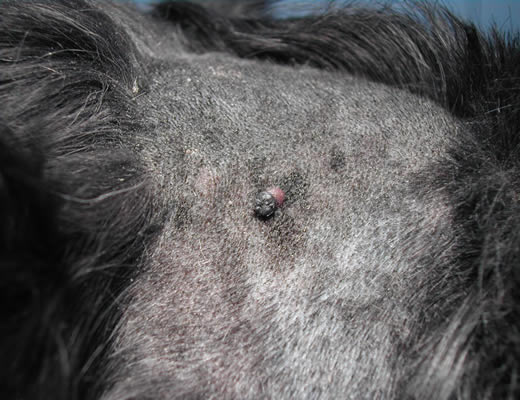 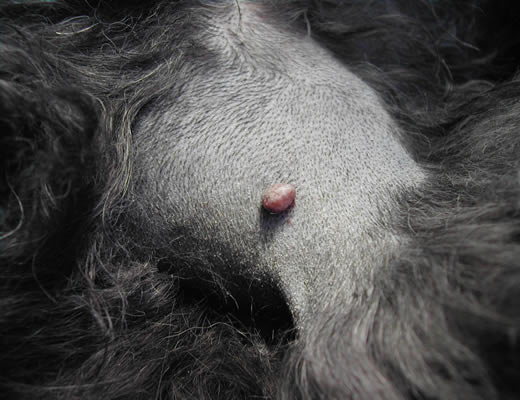 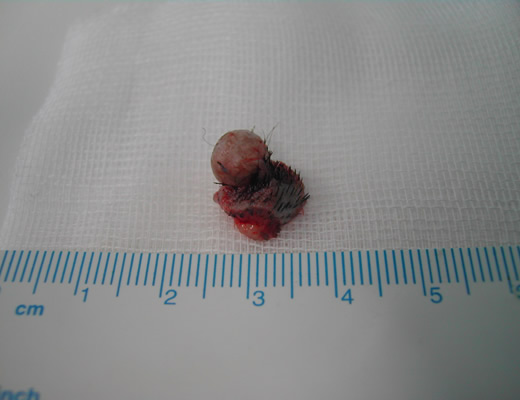 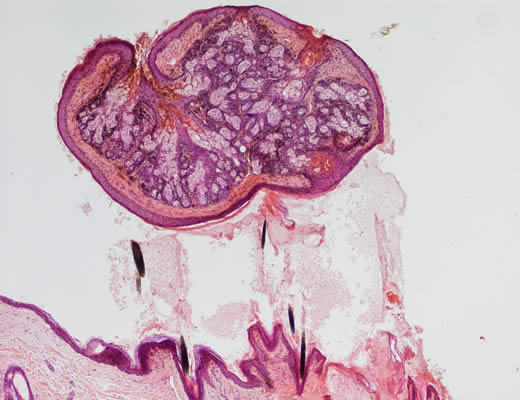 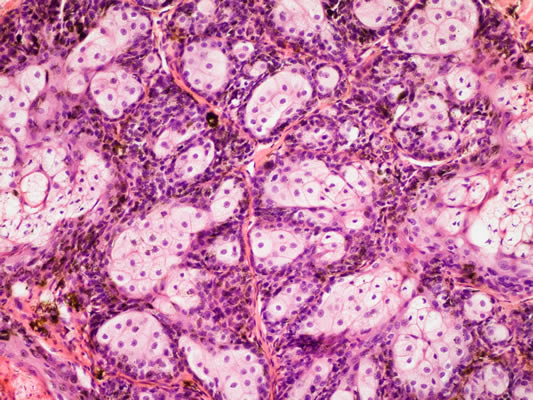 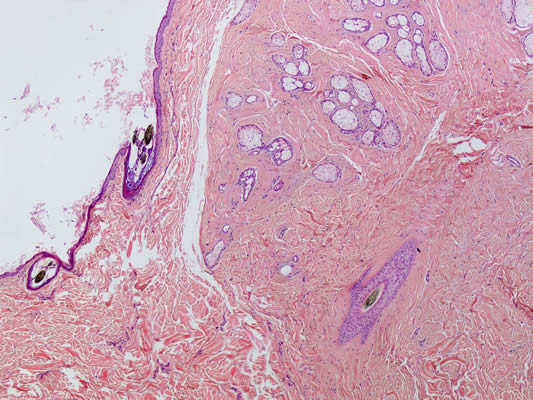 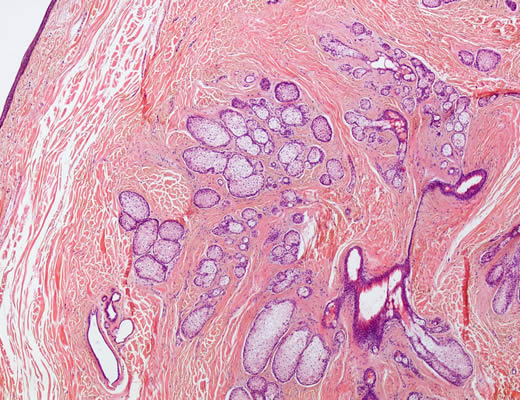 Sebaceous adenoma is a benign neoplasm whose origin is from gland structures (simple adenoma) or ducts and glands (compound adenoma). Sebaceous hamartoma on the contrary represents a non neoplastic possibly congenital (malformation) skin lesion characterized by proliferation of hypertrophic gland lobules and is considered a variant of the fibro-adnexal hamartoma. The macroscopical appearance of the two above mentioned lesions is similar, they are usually solitary, dam-shaped or papillated nodules, less or more then 1 cm of diameter, often alopecic and occasionally ulcerated. They are preferentially localized on the head (sebaceous adenoma), trunk and extremities (sebaceous hamartoma). Cocker spaniel, Beagle, Siberian Husky, Samoiedo and Miniature Poodle are predisposed to the development of the sebaceous adenoma; the neoplasia affects mostly adult dogs (10-year old).

Clinical case: Camillo is a 10-year old, male Scottish terrier; he underwent surgery for a testicular neoplasia (Leydigoma) and is affected by hyperadrenocorticism. Due to the cortico-adrenal hyperfunction and its quality of life (rich diet and scarse movement) the dog tends to be obese. During a control follow up two nodular non pruritic, indolent skin lesions, of about 1cm of diameter, were detected on the head and on the left tight. The first was exophytic, dam-shaped, alopecic, non ulcerated and pigmented (figure 1,2), the latter was exophytic, alopecic and non pigmented (figure 3).
Clinical diagnostic tests: Fine needle aspirated from the two nodules have been performed for cytological examination. The first sample collected from the nodule on the head and stained with Diff-Quick® showed rare epithelial cells organized in small cluster. These cells had abundant foamy cytoplasm, round central nuclei with dense chromatin pattern and were considered to be sebocytes. Together with these cells another type of cells characterized by a dense basophilic cytoplasm and a high nucleo to cytoplasm ratio were observed and considered to be basaloid riserve cells. The second sample, collected from the nodule of the tight was scarsely cellular (a few fibrocytes and rareepithelial cells with features of sebocytes) was considered to be inclonclusive for a diagnosis. In the first case the diagnosis was compatible with hyperplasia/adenoma of the sebaceous gland. The nodules were completely excised (figure 4) and promptly fixed in a 10% buffered formalin solution for histopathological evaluation. Histologically the first nodule (from the head) was a small nodular exophytic neoplasia constituted of an intradermal proliferation of sebaceous lobules (figure 5). Each lobules contained mature sebocytes and peripherally located basaloid reserve cells (figure 6). Neoplastic cells showed an abundant finely vacuolized cytoplasm and ovoidal euchromatic nuclei with moderate anysocariosis. Mild melanization of the cells was observed. The overlying epidermis was intact and the histological diagnosis was consistent with sebaceous adenoma. The nodule on the tight was diagnosed as sebaceous hamartoma and was characterized by intradermal proliferation of hyperplastic sebaceous lobules with a non organized at random distribution. The lobules were variably interconnected and circumscribed by mature and dense collagen bundles (figure 7 and 8). Orphan sebaceous glands were observed without any evidence of connection with the follicle wall. Sebaceous differentiation in the proliferated lobules was normal. No ulceration neither inflammation were detected.
Clinical evolution: The post-surgery period was uneventful. Surgical wounds normally healed by first intenction. Removal of the surgical monofilament 4-0 Nylon has been performed after two weeks after surgery and no complications were observed. At a six-month period follow local relapses were not present.
Conclusions: Sebaceous adenoma in dogs has a prevalence of 6% of all skin neoplasia (Gross et al., 1992). In 5% of the affected dogs the nodules are on the head (Goldshmith and Shofer, 1992). Sebaceous adenoma is usually a solitary lesion, more rarely can appear as multiple nodules. The observation of a nodular skin lesion with clinical and cytological features of a benign sebaceous neoplasia other differentialdiagnosis have to be considered. These include hyperplastic/dysplastic lesions such as the nodular sebaceous hyperplasia, the sebaceous nevus or hamartoma. Histopathology confirms the clinical suspicion allowing to detect the cytoarchitecture of the tumour and its cytological characteristics. Therapy of these benign nodules is surgery. In the case described surgery was curative, no relapses were observed after a 6-month follow up period.
Bibliography: