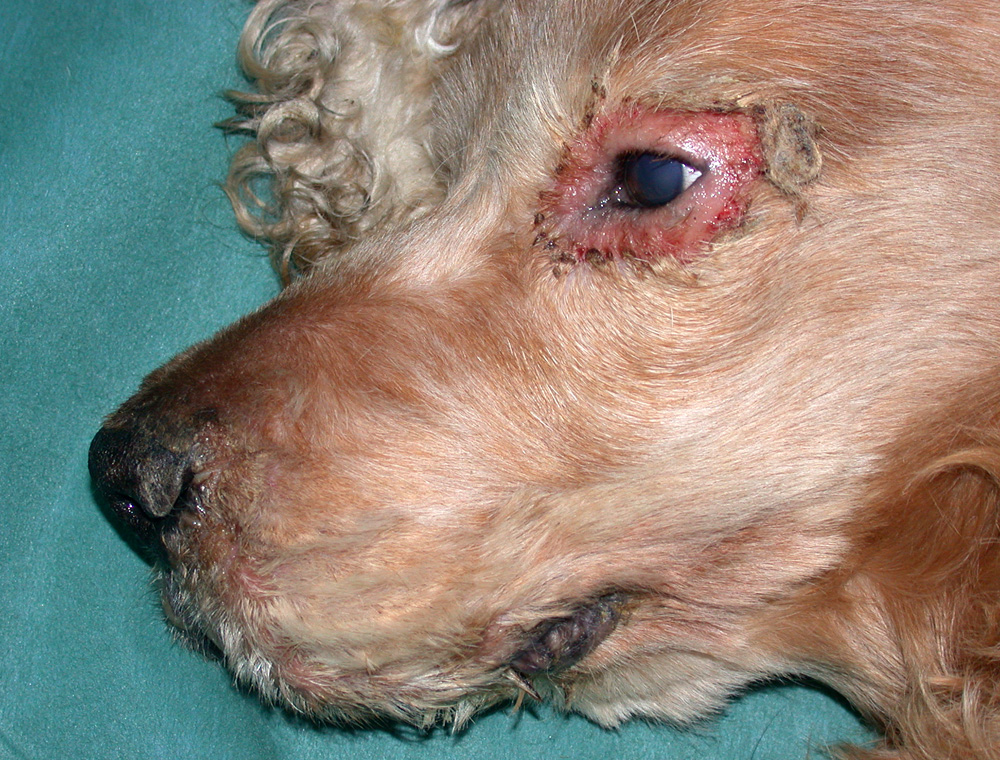 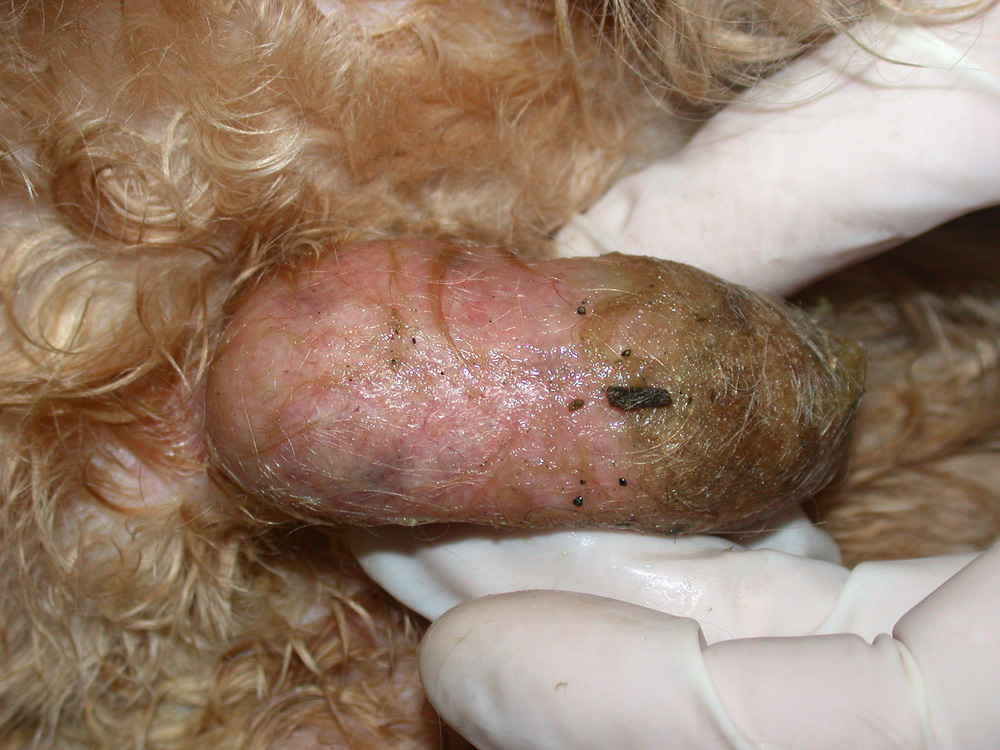 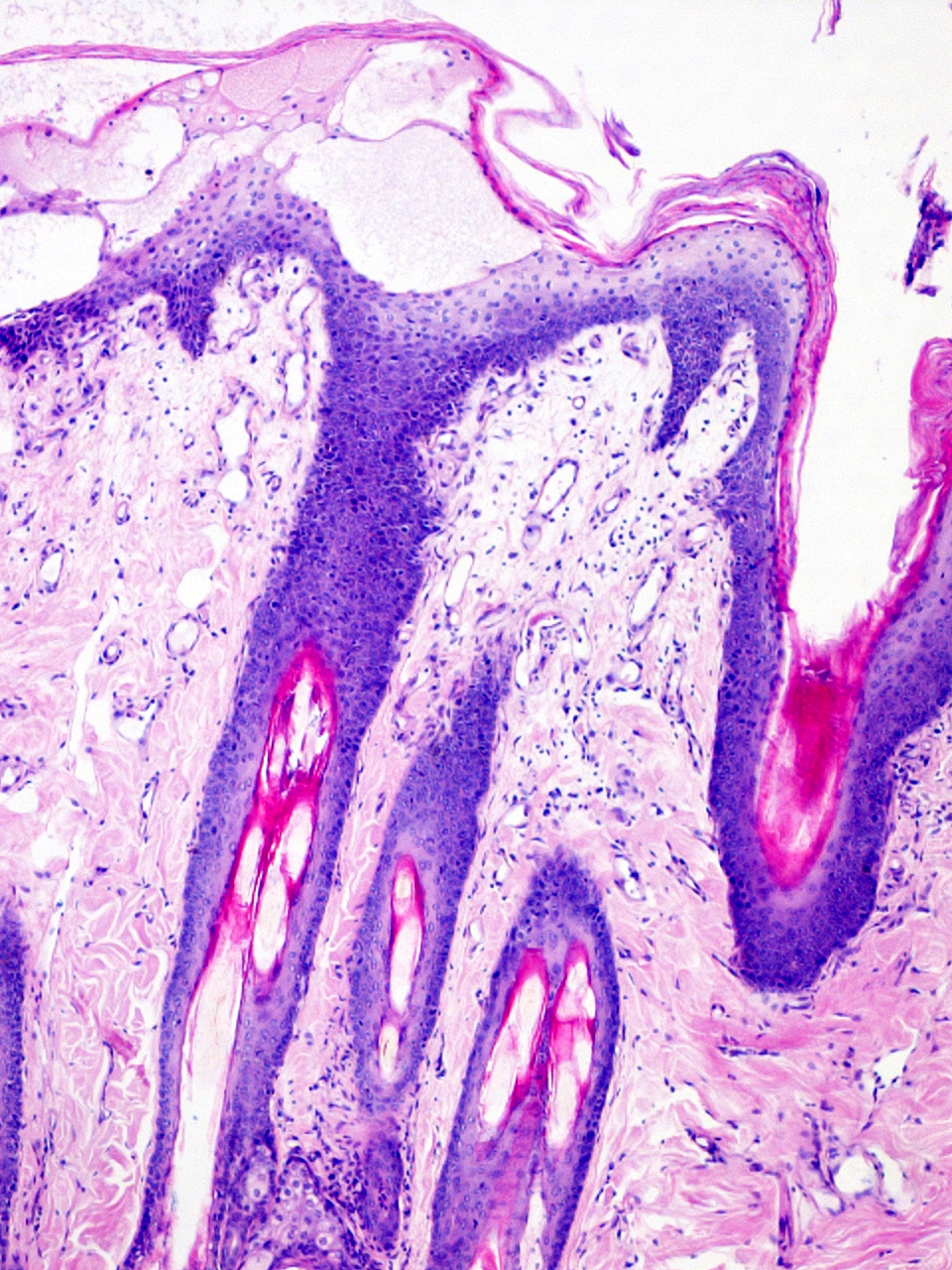 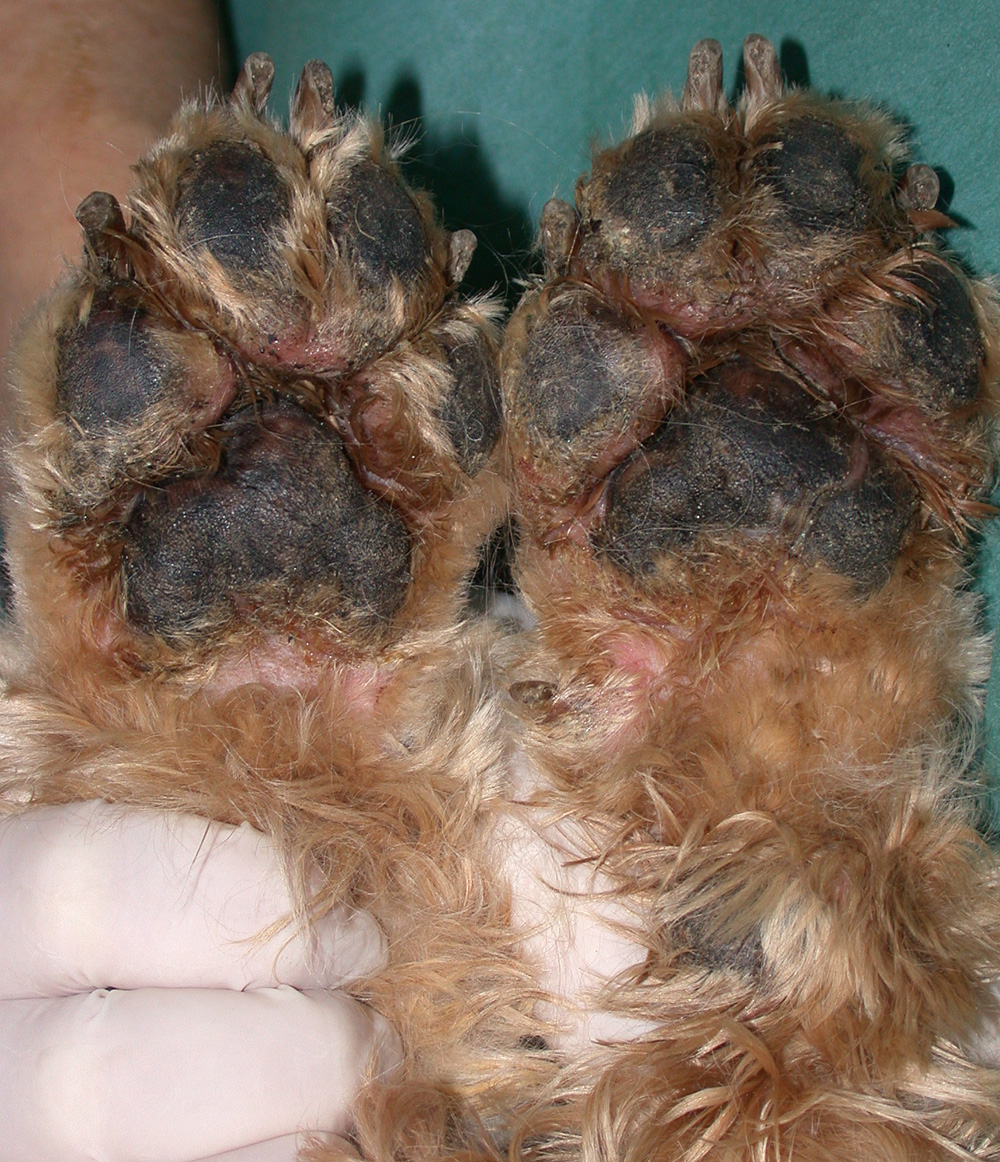 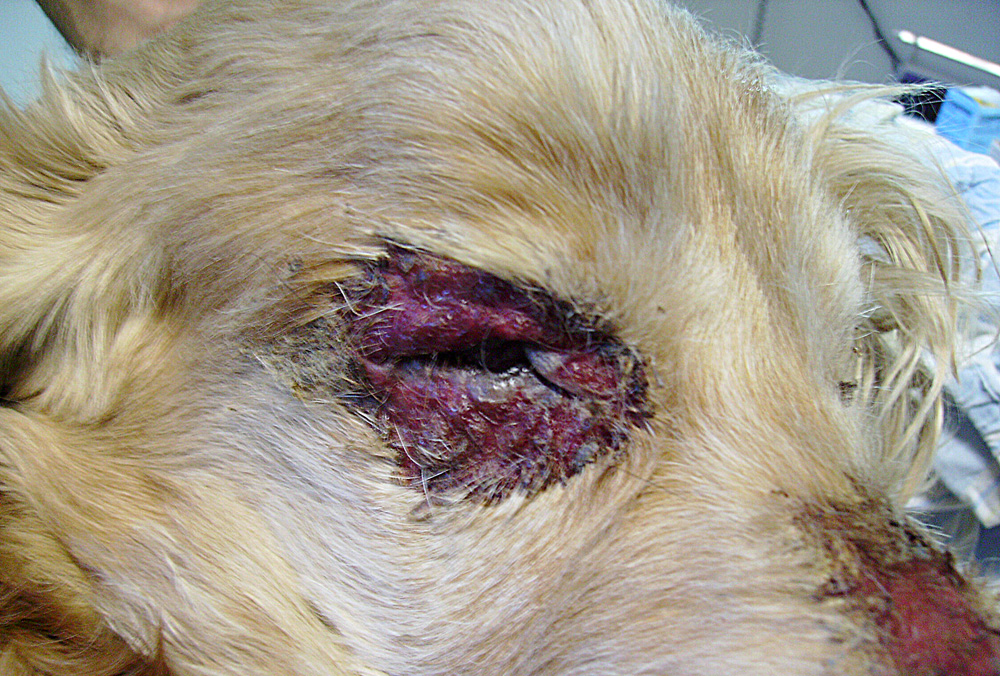 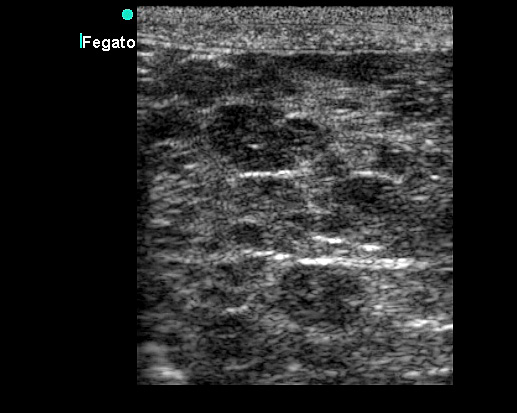 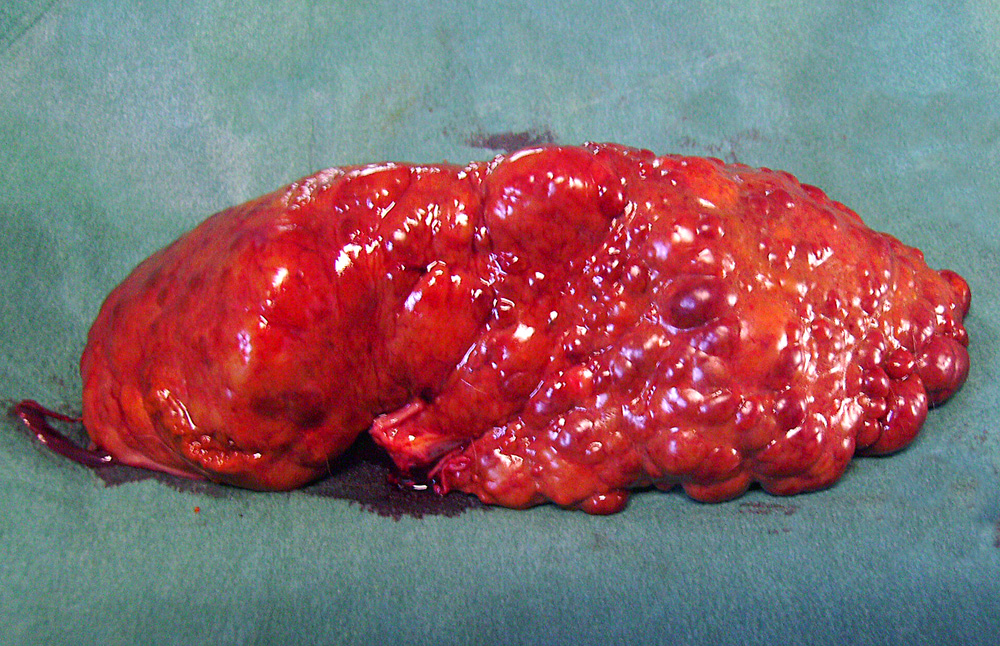 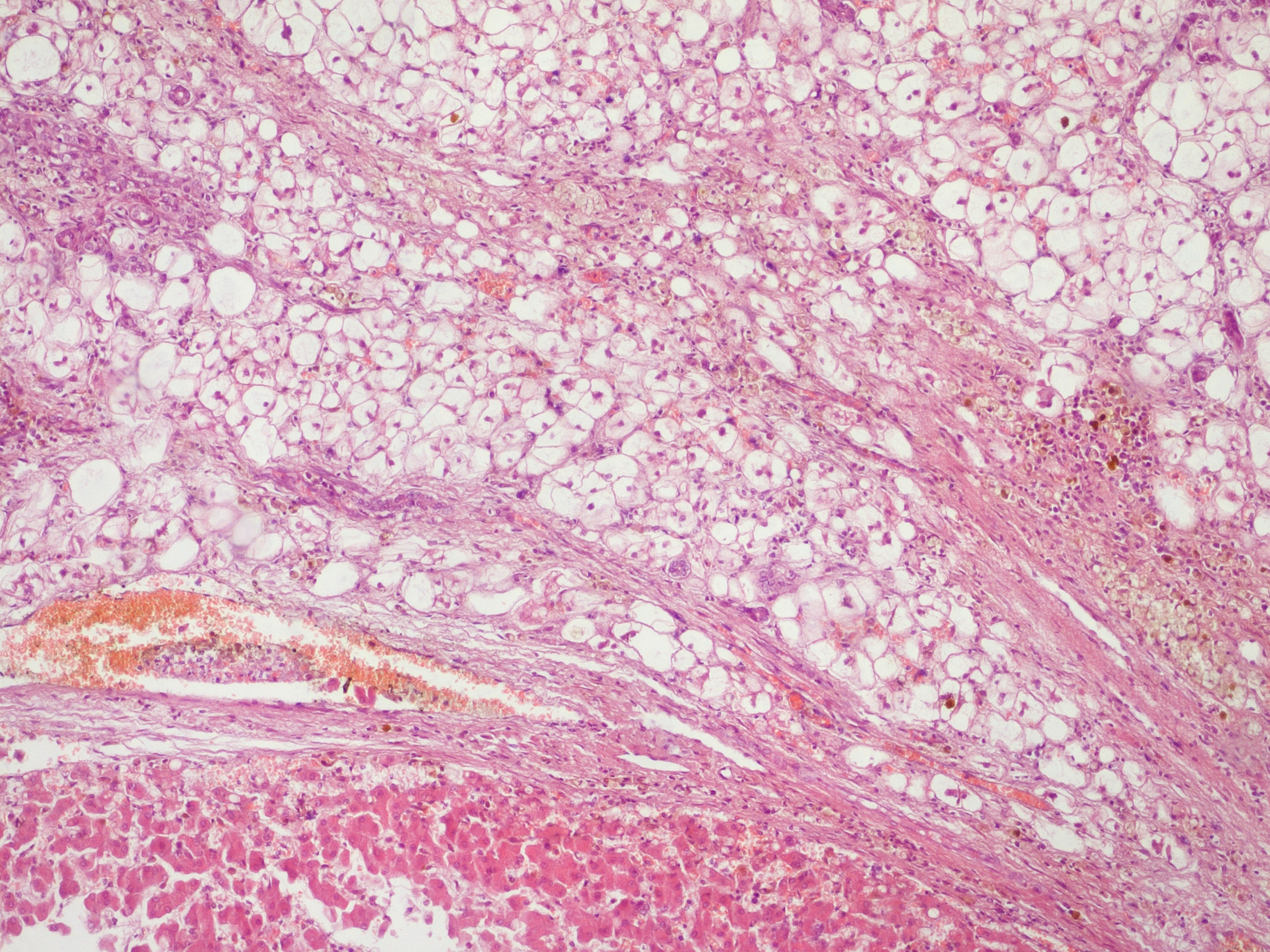 Metabolic epidermal necrosis also known as necrolytic migratory erythema or superficial necrolytic dermatitis, is a rare dermopathy mainly associated to a tumour of the alpha cells of the pancreatic islets (glucagonoma) in humans. In the dog, on the contrary, the disease is more often associated to a chronic liver condition, known as hepatocutaneous syndrome.

Clinical case: An eleven-year old, male, Cocker spaniel was presented at clinical evaluation for the presence of a 20-day history of podal pruritus and lameness (posterior limbs). The latter was treated with a 10 day course of antibiotics and corticosteroids, but this therapy did not lead to any clinical improvement. The lameness relapsed after 10 days from therapy withdrawal together with erythema and severe podal and periocular pruritus. On physical examination the dog was lethargic and a generalized lymphoadenopathy was detected. Dermatologic examination revealed the presence of crusted erosive and ulcerative lesions localized around the lips and eyes (figure 1), on the scrotum (figure 2), on the prepuce and perianal region. Erythema of the interdigital area and mild hyperkeratosis of the pads (figure 3) were also observed.
Clinical diagnostic tests: Fine needle aspirations of lymph nodes and bone marrow were negative for leishmania organisms. Skin cytology, obtained through apposition, showed a neutrophilic infection characterized by the presence of intracytoplasmic cocci, bacteria were also present in the extra cellular background. CBC and urine analysis showed the presence of hypocromic microcytic non regenerative anaemia, high hepatobiliar enzymatic activity, hypoalbuminemia and a high reactive protein C concentration. Serology for leishmania (IFAT) was negative. Abdominal ultrasonography showed a severe compromission of the hepatic structure which appeared as non homogeneous, with disseminated hypoecogenic lesions throughout all the lobes (figure 4). At histopathology the lesions targeted the epidermis. These were characterized by diffuse parakeratosis, vacuolization of the suprabasal layers and hyperplasia of the basal layer (figure 5). In the dermis a perivascular to interstitial neutrophilic dermatitis was observed.
Clinical evolution: For the skin lesions cefalexin (20 mg/kg/bid) was given while for the liver disease a specific diet integrated with essential fatty acids, sulphate zinc (5 mg/kg/bid) and yolk eggs (one every 5 kg) was prescribed. After one month therapy the clinical condition of the dog worsened. At dermatological re-examination the lesions were more severe and characterized by involvement of the muzzle and periocular mucocutaneous junctions (figure 6) and ulcers on the dorsum of the nose and foot pads. The dog was anorexic, lethargic, did not move and the owner opted for euthanasia. At necropsy the liver was shrunken and showed several small nodules protruding from the entire surface and throughout the parenchyma (figure 7). Liver histopathology showed wide areas of lobular vacuolar degeneration associated with steatosis and collapse of most of the lobules which was compatible with a chronic idiopathic liver disease (figure 8).
Conclusions: The pathogenetic mechanisms at the base of the skin lesions which develop during the course of the disease are still not well known. The current hypotheses consider that keratinocyte vacuolar changes might be a consequence of hypoaminoacidemia and hypoalbuminemia following hyperglucagonemia or liver dysfunction, this latter might be, in turn, responsible of the alterated glucagons metabolism. Infact, keratoyalin granule synthesis in the epidermis needs high amounts of amino acids, such as lysine and histidine, and albumin is the main carrier for zinc and fatty acids, which are essential for the epidermal integrity. The diagnosis of the hepatocutaneous syndrome is based on the clinical aspect of the skin lesions and their associated with systemic signs. Hematochemical exams, abdominal ultrsonography, CT and MNR can help in the detection of liver and pancreatic involvment. Histopathology is of useful since the epidermis shows a typical staining pattern resembling the French flag. The deep part of the epidemis is blue (basla layer hyperplasia), the middle of the epidermis is white (keratinocyte vacuolar degeneration and necrosis), while its superficial part is red (parakeratosis). Prognosis is poor, no specific therapy is available for the chronic liver disease. Partial improvment can be obtained using hyperproteic diets, integrated with essential fatty acids and zinc. In the case of a pancreatic tumour, radical surgery represents the only choice.
Bibliography: